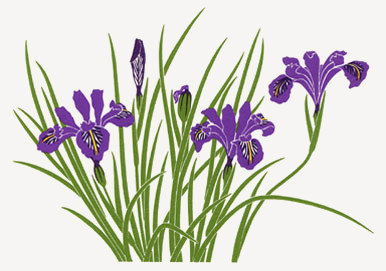 This showy little wild iris, occurring in many shades of purple, is common in neglected fields and roadsides in the Willamette Valley in early spring. It was introduced into the formal world of botany by that intrepid Scot, David Douglas, the exploring naturalist whose name id commemorated in the Douglas-fir.

Douglas made the harrowing voyage to northwest America in 1824 under protection of the Hudson's Bay Company, to collect specimens for the Horticultural Society of London. He found this iris "a common plant in North California, and along the coast of New Georgia, in dry soils or open parts of woods, flowering in April and May." From Material sent by Douglas, John Lindley, Professor of Botany in the University of London, wrote the original description in 1829:

"A plant forming close tufts of rigid, erect, linear-ensiform, evergreen, tough leaves, which in wild specimens are rather shorter than the flowers. Stem erect, a foot or rather more high, angular, leafy, clothed at the base with remains of the leaves, as in Allium victorialis. Ovarium on a long stalk, not enclosed within the floral leaves, somewhat 3-cornered. Flowers about the size of Iris virginica, sessile on the ovarium, dark purple, veiny; the outer petals obovate, acuminate, spreading, beardless; the inner obovate, rounded, erect, shorter than the others. Stigmas 2-lobed, short."

Iris, the Greek word for rainbow, was applied to this genus for its variety of color. The Latin species name tenax (tenacious) derives from these observations made by Douglas on uses of the plant:

"The native tribes about Aguilar (Umpqua) river … find this plant very serviceable for many purposes: from the veins of the leaves fine cord is made, which is converted into fishing nets; and from its buoyancy, great strength, and durability, it suits this purpose admirable. It is also made into snares for deer and bears; and a good idea may be formed of its strength, when a snare, not thicker than a 16-thread line, is sufficient to strangle Cervus Alces, the Great Stag of California, one of the most powerful animals of its tribe. The cordage is also manufactured into bags and other articles."

Quotations are taken from Edward's Botanical Register of 1829.